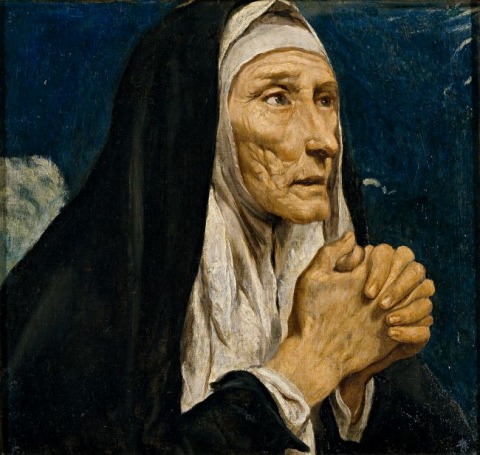 True story.  There once lived a woman whose son had abandoned the faith in which she had raised him.  She was far from perfect, and married to a difficult man, but had striven to bring up her son well.  Yet he had fallen in with a bizarre ideology which was considered “woke” in his circle, and had begun living with a woman who was not his wife.  His mother prayed, but nothing seemed to happen.  He was willing to talk with her, but she couldn’t get through.  In tears, she sought out a wise and holy man.  If only he would talk to her son!  If only he would take the young man in hand, refute his errors, and rebuke him for all the wrong in his life!

Curiously, the wise man refused.  He said that her son was still too full of himself to listen -- still too puffed up with pride, still too infatuated with the newness of his woke beliefs, for the wise man’s intervention to do good.  He advised her to pray for her son, and since the young man was still seeking the truth, he would eventually find it himself.  Those who seek with all their hearts will find.

The woman pestered, weeping and imploring the wise man to change his mind.  Finally he lost patience, saying "Go, go!  Leave me alone!  Continue what you are doing!  It is not possible that the son of all these prayers and tears should be lost."

That must have sounded too good to be true, but it happened.  The wise man, who was the local bishop, is known to us as St. Ambrose.  The woman is known to us as St. Monica.  The woke ideology that had ensnared her son was called Manichaeism.  Her son, called Augustine, returned to the faith and became one of the greatest saints in the history of the Christian Church.  Not a bad result of prayers and tears.

All this happened at the end of the fourth century and the beginning of the fifth.  For generations, the story has encouraged parents of children who lose their faith.  Even so, it raises questions.  For example, even during the most wanton period of his life, Augustine didn’t lose interest in finding the truth.  Today the young are told that there is no truth, or that truth is “whatever works for you.”

Yet from this and countless other stories about “reverts” who return to their faith, parents of wandering children can draw many more helpful lessons than one might think, lessons applicable even in times like our own.

Why do people lose their faith?  Some are raised in an excessively emotional form of faith, which doesn’t satisfy their minds, or a cold form, which doesn’t satisfy their hearts.  Some never had faith in the first place, but only thought that they did.  Some were treated badly by religious phonies.  Some -- I am describing my own young self – didn’t want God to be God, and arrogantly preferred to make gods of themselves ….

[Continue reading my article at The Daily Wire – sorry, there’s a paywall, so I am not allowed to show you the whole thing here]