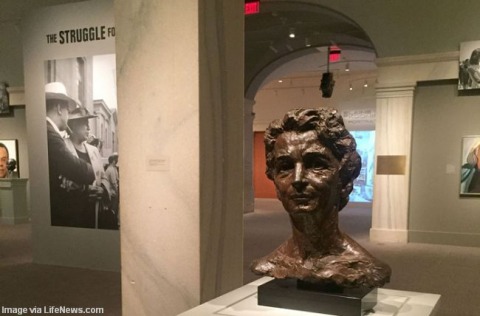 I don’t think much of tearing down statues, defacing monuments, or trying to pretend history didn’t happen.  I agree with James V. Schall, S.J., about the need for humility and forgiveness, and even in the case of most odious historical figures, I would much rather supply information to place their statues in context.  Don’t murder memory.  Learn from it, and live in peace.

But if Black Lives Matter protestors expect their complaints about the wickedness of the persons honored by these statues to be taken seriously, shouldn’t they at least be consistent?  They say a great deal about the offenses of Robert E. Lee, Woodrow Wilson, and Christopher Columbus – Lee, by the way, was a complex man who deplored slavery as a “moral and political evil” even though he fought for the South -- but they give a pass to the icons of the left, like Margaret Sanger, founder of Planned Parenthood.

Sanger is commonly described as a nurse, a reformer, and an advocate for the poor.  One writer calls her “the working-class radical who did more for twentieth-century women than any politician, male or female.”  Her bust occupies a prominent place in the Smithsonian Institution’s Struggle for Justice exhibit.  Her statue is displayed prominently in Boston’s Old South Meeting House, which is part of the Freedom Trail.  It forms part of the Voices of Protest exhibit.

Yes, she could certainly be called a Voice of Protest.  She strongly protested the great many people of the planet whom she considered unfit.  She was a racist, a vociferous opponent of charity, and an advocate of controlled human breeding.

Since her defenders say these are ungrounded smears, let us take a moment to document the facts.  All of the documents are online, so you can check me if you wish.

“The most merciful thing that the large family does to one of its infant members is to kill it.” -- Woman and the New Race (1920).

“Those least fit to carry on the race are increasing most rapidly.” -- The Pivot of Civilization (1922).

“Possibly drastic and Spartan methods may be forced upon American society if it continues complacently to encourage the chance and chaotic breeding that has resulted from our stupid, cruel sentimentalism.” -- The Pivot of Civilization.

“Necessarily and inevitably, we are led further and further back, to the point of procreation; beyond that, into the regulation of sexual selection.” -- The Pivot of Civilization.

“A stern and rigid policy of sterilization and segregation,” in work camps, is necessary for “that grade of population,” including illiterates, “whose progeny is already tainted, or whose inheritance is such that objectionable traits may be transmitted to offspring.”  -- “A Plan for Peace,” in The Birth Control Review (April, 1932).

“The reproductive impulse” is “in continual conflict with our economic, political settlements, race adjustments and the like.” -- The Pivot of Civilization.

“Under such circumstances we can hope that the 'melting pot' will refine.  We shall see that it will save the precious metals of racial culture, fused into an amalgam of physical perfection, mental strength and spiritual progress.” -- Women and the New Race.

Hmm.  What do you suppose the lady meant by “race adjustments,” and by “refining” the melting pot to purify “the precious metals of racial culture”?

Give up?  Here are some clues.

Sanger wrote, “The lower down in the scale of human development we go, the less sexual control we find.  It is said the aboriginal Australian, the lowest known species of the human family, just a step higher than the chimpanzee in brain development, has so little sexual control that police authority alone prevents him from obtaining sexual satisfaction on the streets.” -- What Every Girl Should Know (1912-1913).

In 1926, Sanger spoke to the women’s branch of the Ku Klux Klan at Silver Lake, New Jersey, because “always to me any aroused group is a good group.”  The event was a great success, and “A dozen invitations to speak to similar groups were proffered.  The conversation went on and on.”  An Autobiography (1938).

After Lothrop Stoddard proposed in his book The Rising Tide of Color Against White World-Supremacy (1920) that “Just as we isolate bacterial invasions, and starve out the bacteria by limiting the area and amount of their food-supply, so we can compel an inferior race to remain in its native habitat,” Sanger invited him to join the Board of Directors of her new American Birth Control League.

If they do ever decide to be consistent, today’s protestors might take a leaf from the book of a group of black pastors in 2015, who stood peacefully in front of the Smithsonian to dramatize their request that Sanger’s bust be removed.  In their letter to the Institution, they wrote that “perhaps the Gallery is unaware” that Sanger supported eugenics, racism, and contempt for the feeble minded, or that she spoke at KKK rallies.

Smithsonian director Kim Sajet replied that the statue would stay, but the important thing is the reason that she offered:  Not just that Sanger “made a significant impact on American history and culture,” which is true, but that she “fought to achieve civil rights for disenfranchised or marginalized groups.”

That statement is a greater distortion and erasure of history than tearing down the statue would have been.

I guess Black Lives Matter is okay with that.