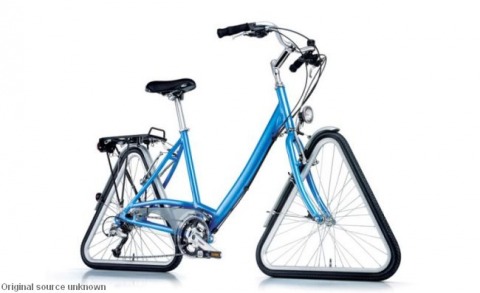 The techniques for reinventing the wheel get more and more sophisticated.  All too often, the reinvented wheel is less serviceable than the old one.  I am reminded of an old Johnny Hart comic strip in which the caveman shows off his new triangular wheel, boasting that it improves on the square wheel because it eliminates one bump.

For example, the accumulated wisdom of our ancestors gave us the perfectly useful idea of a vice.  At some point, reinventing the wheel, we began calling acts of vice “mistakes.”  Still later social psychologists took reinvention one step further by calling them “cognitive biases.”

Case in point:  Recently an educational publisher send me an advertisement for teaching material concerning what the author called “loss aversion bias,” a cognitive bias that supposedly makes even “basically good” people do bad things.  The author’s example was a man who took out an illegal loan on his own business because he was afraid that it would fail.  This discussion was supposed to provide students with insight into finance and investment strategies.

There are such things as cognitive biases, but cognitive bias wasn’t the man’s problem.  Because of his timidity, he yielded to temptation to commit fraud.  His problem was vice:  Cowardice and injustice.

Of course there is a cognitive element in vice, because to do wrong one must think think of it as right, and I certainly don't object to teaching people in business school to shun vice.  But this isn’t that.

We all have moral flaws, so let us not preen ourselves on how wonderful we are.  But vices don’t spring up overnight; they are habits of the heart.  To the extent that the man was susceptible to cowardice and cheating, no, he wasn’t “basically good.”  And our own sins aren’t “mistakes” either.