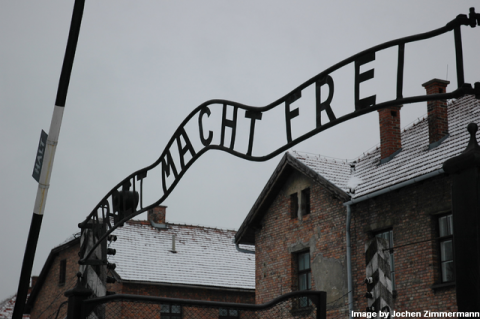 You may have noticed that I keep coming back to certain puzzles, like a dog chewing a bone.

We often say that each person is responsible only for his own good and evil, but is that true?  Obviously distinctions must be made, and I hardly know where to begin making them.  Yet many of our moral judgments make sense only if there are ways in which guilt, amends, and merit can be shared.

Most Germans think that their nation as a whole bears special obligations to the Jews, even though few of those responsible for the Holocaust remain alive, and many who were alive at the time opposed it.

Lincoln argued that although it was necessary to put slavery to an end, the north could not afford to be self-righteous because the entire country was responsible for the sin of human bondage, even those who had never owned slaves.

Martin Luther King held that although it was necessary to end racial segregation, the activists could not afford to be self-righteous either.  Just by virtue of their shared humanity the oppressed and the oppressors are “caught in an inescapable network of mutuality, tied in a single garment of destiny."

The Catholic Church believes that the virtues of the saints can have effects in the souls of the rest of us – this is the much-maligned doctrine of the treasury of merits, which countless persons have found confirmed in experience.

Protestants, who don’t believe in the treasury of merits, still believe in the Atonement, which makes no sense unless somehow, someone who is innocent of wrong can pay the price for someone else who is guilty but cannot pay it.

And the reason for the Atonement is original sin, which makes no sense unless we are all somehow complicit in the rebellion of our first parents, all co-sufferers of the curse, or as the older writers put it, “all contained in Adam.”

Before you say that’s a lot of theological hooey, consider:  Wouldn’t every reasonable person be ashamed if his father had committed an unspeakable deed?  Wouldn’t you?