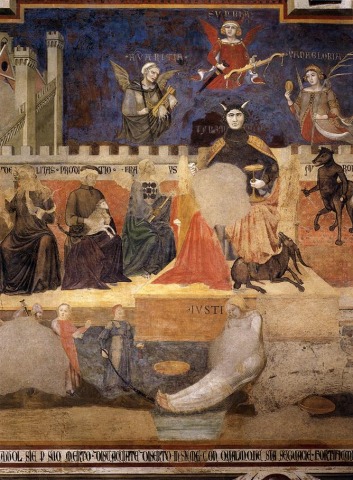 Some time ago, after I blogged about civil disobedience to unjust laws, several readers asked me to blog about a related question:  How should one respond if the government itself becomes tyrannical?  You will not be surprised that I follow St. Thomas Aquinas’s analysis -- rather than, say, John Locke’s or Karl Marx’s.

The best thing to do, of course, is to take care that the government does not become tyrannical.  One thing this requires is a good and balanced governmental structure which recognizes the principle of rule by law; the other is virtue, both on the part of the citizens and on the part of the rulers, for otherwise even the best constitution is mere drapery.  But what should be done if despite all precautions, the government does degenerate into tyranny

The answer depends on what kind of tyranny it is. Extreme, energetic tyranny is the worst possible kind of rule, for the ruler actually attacks the common good. Everyday, lazy tyranny is not as bad, for the ruler merely neglects it.  If the tyranny is of the everyday sort, St. Thomas thinks it is better to tolerate it than resist it, because still worse evils threaten no matter how the resistance turns out.

For if the resistance fails, it may provoke the ruler to rage and turn into the extreme sort of tyrant; it it succeeds, the most probable result is rule by competing selfish factions, and this state of affairs usually ends with the leader of one of the factions seizing the tyranny for himself.  The new tyrant is likely to be much harsher than the old one, if for no other reason than that he fears to suffer the same fate.

What if the tyranny is of the extreme sort? For that case, St. Thomas does propose resistance, but he insists that it be carried out constitutionally, by public authority rather than by private presumption.  Presumably, the constitutional traditions of various countries may provide various ways to depose a tyrant.  By way of example, St. Thomas considers only one such case, in which the assemblies of the people have the constitutional authority not only to appoint the king, but also, by implication, to remove him.

Needless to say, the tyrant will probably seek to block any attempt to remove him, for example by preventing the assemblies of the people from meeting. In some constitutional arrangements, further appeal is possible. On the other hand, in an empire, one can appeal against the tyrant to the emperor. Probably St. Thomas would consider all of the sorts of things we call federations empires, so a close parallel to “appeal to the emperor” would be the provision in the U.S. Constitution that allows any state to appeal to the federal government for a restoration of republican rule.

What if constitutional resistance fails?  Then would it become permissible for private individuals to take matters into their own hands?  For instance, might they attempt tyrannicide?  No.  St. Thomas does take the idea seriously, conceding that at first there even seems to be biblical precedent in Ehud’s slaying of the Moabite king Eglon.  In the end, however, St. Thomas rejects tyrannicide.  Among other things he points out that the killing of Ehud was not actually a tyrannicide, but an act of war; Ehud was not acting as a private individual, but as a soldier under the authority of the nation of Israel in its just war against the invader.

This raises an interesting possibility that St. Thomas does not discuss in On Kingship, but that would seem to be permitted by his analysis of just war.  Among the just causes of war, he claims, are are “securing peace,” “punishing evil-doers,” and “uplifting the good.”  Suppose, then, that for just such reasons as these, other nations declare a just war against the tyrant, and a member of the tyrannized country acts under their commission to kill him.  Assuming that all the other conditions of just war are fulfilled, then his act would be permissible for the same reason that Ehud’s was.  It would not be an act of private presumption but of public authority.

St. Thomas gives two other reasons for rejecting vigilantism, one of them theological, the other philosophical.  The theological reason is that it contradicts Apostolic teaching; the philosophical reason is that it is imprudent.  Why is it imprudent?  Because if the assassination of undesired rulers by private presumption were an option, then it would more often be seized by wicked men to slay good kings, than by good men to slay tyrants.

This warning would seem to concern not only solitary rebels, but also rebel armies. Suppose the rebels claim to represent the people as a whole; after all, St. Thomas does hold that a morally competent people should be ruled with their consent.  Although he does not discuss this possibility that rebels might make such a claim, the tenor of his argument suggests that he would not be impressed with it.  Many competing groups may claim to represent the people as a whole; that does not mean that they do.  Besides, he has already explained that factional conflict tends to produce tyrannies even more bitter than those it sweeps away.

So if both national and extranational public authority fails to remove the tyrant, then, barring vigilante actions that would make matters still worse, there is nothing left but to pray – something one should have been doing from the start.

“To pray?” we think.  “How ridiculous.”  But St. Thomas thinks it is very practical.  Tyranny is unlikely to arise among a virtuous people; if it does arise, they have probably been softened and prepared for it by a long period of moral decay.  Until things get very bad indeed, they may even like tyranny, either because the regime has given certain constituencies private benefits, because most citizens have not yet been personally hurt, or because the desires of the people are so disordered that they do not clearly see their own condition.  God does not often protect people from the natural consequences of their corruption; He more often allows these consequences to ensue in order to bring corrupt nations to their senses.

If at last the people do repent and mend their ways, then God will hear their prayers, but St. Thomas warns that “to deserve to secure this benefit from God, the people must desist from sin, for it is by divine permission that wicked men receive power to rule as a punishment for sin.”

Interestingly, the need to couple resistance to tyranny with repentance, prayer, and moral reform was a major theme of colonial preaching during the American quest for independence, though whether the revolution fulfilled St. Thomas’s criteria for resistance – or even Locke’s -- might well be questioned.