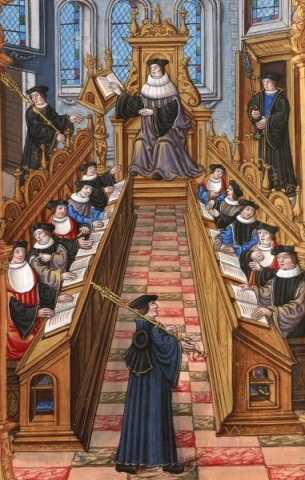 Once upon a time, three noble young men in the bodyguard of Darius, the Persian king, competed over who could give the best answer to the riddle, “Which one thing is strongest?”  The first said that wine is the strongest; the second that the king is the strongest; the third that women are the strongest, but that truth conquers everything.  By the way, the third fellow wasn’t cheating by giving two answers.  He was punning on the Old Testament personification of Divine Wisdom as a woman.

After each of the young men had presented his arguments, Darius delightedly declared in favor of the third, urging him to ask for whatever he wished.  Seizing the moment, the young man asked Darius to remember the vow he had once made to rebuild Jerusalem.  True to his word, the king set the project in motion, whereupon the three young men broke out into thanks to God.  This story is found in the Greek version of Ezra, sometimes called Eszra or 1 Esdras – a book which is read and respected but not accepted as canonical.

Thomas Aquinas has a little fun by reconsidering the third young man’s answer to the riddle in Quaestiones Quodlibitales (“questions about whatever you want”), XII, Question 14, Article 20.  In his day, philosophy and theology professors had to appear in public twice a year to answer questions anyone could pose on any subject, so presumbly someone at the University of Paris really asked him this question.  The audience would have demanded that the answer make sense, and surprisingly, it does.

He writes, Our next inquiry is about the virtues, and first, about a certain intellectual virtue, that is, truth:  Whether truth is stronger than wine, the king, or woman?

Objection 1.  It seems that wine is, because it affects man the most.

Objection 2.  Again, it seems that the king is, because he sends man to what is most difficult, that is, to that which exposes him to mortal danger.

Objection 3.  Again, that woman is, because she commands even kings.

On the other hand, Eszra 4:35 says that truth is stronger.

Here is my response:  This is the question proposed to the youths in Eszra. One should realize that if we consider these four in themselves -- wine, the king, woman and truth -- they are not comparable, because they do not belong to the same genus.

Nevertheless, if they are considered in relation to a certain effect, they coincide in that respect, and so can be compared with each other.  The effect in which they come together and can be compared is the effect they have on the human heart.  One must consider, therefore, which among them most affects the heart of man.