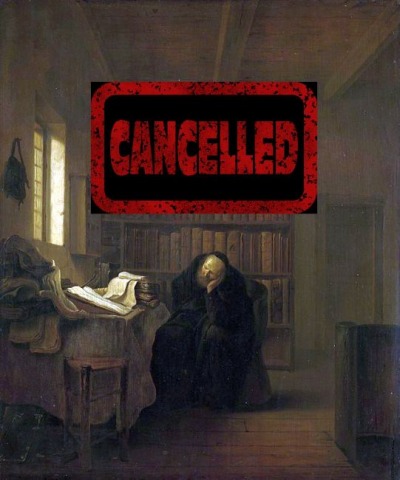 By now everyone knows what canceling is.  Even so, there is a tendency to play it down.  Many people who went to college back in the day can’t really believe the strength of university cancel culture.  They don’t doubt that canceling happens, but they think it must be the exception rather than the norm.

I can understand the skepticism of a lot of non-academic people.  “It wasn’t like that when I went to school.  How could things have changed so quickly?”  Actually, even if it wasn’t quite so bad then, it may have been worse than they thought; it’s hard for students to recognize left-wing professorial bias when almost all of their professors are biased the same way.  Still, people have eyes.  Afterward, when cancel culture invades the places where they work, then they may take notice.

It’s a little harder to understand why even scholars in the midst of university cancel culture often make light of it.

Naturally, left-wing academics do that.  One bad motive and two naïve ones seem to operate.  The bad motive is to deny the strength of cancel culture because you are one of the perpetrators, and smearing people who say that there is such a thing is one of your techniques.  The two naïve motives are more interesting.

One naïve motive arises from a feeling of safety.  I’ve heard left-wing colleagues say, “What cancel culture?  I speak my mind, and nobody has tried to cancel me.”  Of course not, because they are speaking left-wing minds.  Cancel culture operates only on people who step off the reservation.

The second naïve motive arises from obliviousness to what one’s own milieu is really like.  Fish don’t know they are wet; left-wing academics don’t always know how far left they are.  Although they may have traveled the world, ideologically they are provincial.  I have colleagues who think they are moderates merely because they are at the midpoint of the left-wing spectrum.

To people like that, a climate in which non-left-wing opinion is suppressed doesn’t even seem suppressive.  They are hardly aware that other sorts of opinions exist, except in freakshows, and they may even view non-university culture as a whole as a kind of freakshow.

One reason seems to be that conservative academics internalize the norms of the surrounding academic culture.  That’s what people do; we are social beings.  Though academics view themselves as independent, actually they tend to be even more susceptible to peer pressure than most other sorts of people.  The result?  Some conservative academics don’t express their views at all.  Some do, but apologetically – “I’m not one of those kinds of conservative.”  Some habitually express their views in ways that don’t challenge the left, always accepting the way that leftists frame the questions.

People who do these things well enough may be left alone because the institution finds them useful for cover.  They may feel unthreatened because they don’t understand their own status, and they are not being threatened at this moment.  And so they too say, “Nobody has tried to cancel me.”