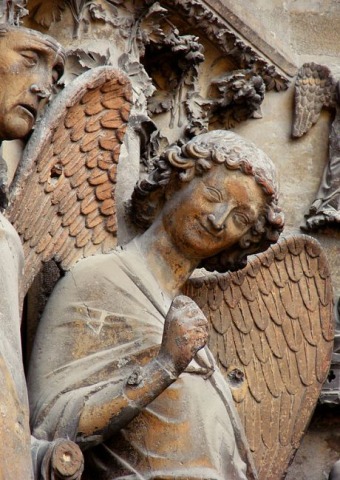 There is another pandemic, far worse than the coronavirus, a plague of cultural insanity.  At present I am not trying to argue the point, but speaking to the multitude who already know.  The superspreaders of the plague don’t see themselves as crazy, and they have a lot of power to do harm.

Needless to say, contagious madness has to be resisted and argued against.  But there is so much sickening venom in public discourse!  How can anyone swim against the flood of bitter poisons without swallowing some of it and becoming sick himself?  It is easy to rant against ranters, to be bitter against the bitter, and to go mad in opposing insanity.  But that doesn’t help a bit.

Allow me to announce the vaccine for contagious madness:  Humor.  And I am not joking.

Though it wasn’t a sidesplitter, I hope the last sentence gave you at least a very small smile, because the superspreaders of the plague are utterly humorless about themselves.

St. Thomas More’s remark that “the devil … cannot endure to be mocked” is familiar, but the passage in which it appears is not so well known, and is well worth quoting too.  This is from More’s Dialogue of Comfort against Tribulation, written while he was in prison for conscience -- a circumstance in which the reason of a less virtuous man would have tottered.  Though the temptation to bile and bitterness must have been very great, More makes a strength of it:

Some folk have been clearly rid of [certain] pestilent fancies with very full contempt of them, making a cross upon their hearts and bidding the devil avaunt.  And sometimes they laugh him to scorn too …. And when the devil has seen that they have set so little by him, after certain essays, made in such times as he thought most fitting, he has given that temptation quite over.  And this he does not only because the proud spirit cannot endure to be mocked, but also lest, with much tempting the man to the sin to which he could not in conclusion bring him, he should much increase his merit.

The great saint is not speaking of the sort of thing that passes for humor among most of today’s comics and funny men.  The wrong kind of mocker laughs goodness and innocence to scorn, and he cannot bear to be mocked any more than the devil can.

But the right kind of mocker is a cheerful friend of archangels, who destroys wicked pretense by showing how silly it is, and does not mind being mocked by silly people.  May we all become humbler scoffers, godlier mockers, and more fruitful fools.