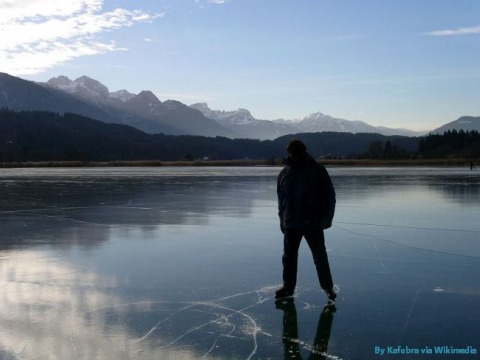 I believe morality must be founded on an objective reality human minds don’t make up, and this reality is God.  Many atheists agree, which is why they become nihilists when they stop believing in God.  However, a friend who is studying philosophy at my university insists that you can be a moral realist without God, and to my surprise, some contemporary atheistic philosophers seem to agree.  I try to give their argument justice, but honest to God I can’t see how you can be an atheist and a moral realist at the same time.  It is like eating a cake and still having it.  If naturalism is true, then aren’t we just meat bags full of water with no dignity?

My friend says I am caricaturing his position.  Am I missing something, or is he?  I don’t know how to justify my keen sense of the necessity of God for morality.

By the way, although my friend says he is a moral realist, he refuses to commit to any actual moral rules.  He says they are all merely trivially true and uninteresting, or else outright false.

Nevertheless, your friend’s position fails at another level.  The first canon of the rational mind is that there are reasons for things.  Moreover there has to be a First Reason, because an infinite regress of reasons for things is no reason at all.  Ultimately, then, whatever does not have to be must depend on something that has to be.  This First Reason -- the One who does have to be, the necessary reality on whom all other reality, physical and moral, depends – is God.  To reject God, then, is in effect to say that there don’t have to be reasons for things -- that in the end, nothing has to make sense – even if your friend has not thought all the way through to this consequence of his view.  And let us be very clear:  No one who believes that things don’t have to make sense has any business saying that anything at all is true or false.  For how would he know?  Reason, for a person in his position, is no more than a special case of unreason.  And that applies to moral reasoning too.

The problem with the argument is that anyone who seriously looks into the meaning of murder quickly finds that that this is not all it means.  Murder is the deliberate killing of innocent human beings -- as well as the killing of the guilty without public authority, without adequate proof of guilt, or for offenses for which the punishment would be disproportionate to the guilt of the offense.  Yes, conceptions of murder may vary slightly from place to place – of course they do!  But why?  Because “murder” has no meaning?  No, because it isn’t easy to work out the details of such things as what constitutes adequate proof of guilt – and also because there are two universals, not one.  I mean by two universals that alongside the universal prohibition of murder, there is a universal, sinful desire to fudge.  Even so, the definition I’ve given is the central tendency of all those conceptions of murder, the objective norm that they approximate, the idea on which thoughtful people converge.

So if your friend thinks “Thou shalt not murder” is only trivially true, he is mistaken.  And if he thinks the rule is meaningful but outright false – that it is all right to deliberately take innocent human life -- you are not going to convince him by philosophical arguments, because in this case his problem is not just philosophical error, but a corrupt will.

Even if we leave aside the deeper problem I explained earlier, that to deny the First Reason is to plunge a stiletto into the heart of all reasoning, his attempt to be good without God will face at least seven practical obstacles.

First, because he does not recognize this Supreme Good, for the sake of which all created goods exist and to which they are ordained, it will not make sense to him that although certain acts can be directed to it, others cannot.  Consequently, he will find it difficult to understand how any act can be intrinsically evil.  He may be tempted to think that for a good enough result, we may do anything.

Second, because he does not recognize Divine providence, the idea that he should do the right thing and let God take care of the consequences is likely to seem senseless to him.  It will seem to him that if there is no God, then he must play God himself.  He may find it difficult not to do evil for the sake of good.

Third, because he does not recognize the Creator of his conscience, he must regard conscience as the meaningless and purposeless result of a process that did not have him in mind.  Because it will be hard to believe that a ragtag collection of impulses and inhibitions left over from the accidents of natural selection could have anything to teach him, he will be tempted to think that the authority of conscience is an illusion.

Fourth, because he does not accept the biblical promise to believers, that “God is faithful, and he will not let you be tempted beyond your strength, but with the temptation will also provide the way of escape, that you may be able to endure it,” he is likely to view his moral dilemmas as inescapable, and to be inclined to the theory that “dirty hands” are logically unavoidable.

Fifth, because he does not believe in divine grace -- in the undeserved help God gives to those who are trying to follow Him -- he will be unable to avail himself of its assistance.  Presumably he will be able to do many good things and make some progress toward becoming a good person, but when he meets the wall that each of us meets -- when he finds himself doing the wrong he does not want to do, and not doing the right that he does want to do -- he will be unable to cry out to Christ for assistance.*

Sixth, because he does not believe in the supernatural virtues – those which cannot be worked up just by effort and discipline but must be infused into us by God -- he will be unable to receive them at all.  For example, though he may love his wife with natural love, he will fail in that supernatural charity which enables him to love her with the very kind of love with which God loves her.

Seventh, because only a Person can forgive sin, and he does not believe in this Person, the moral law will seem to him a harsh accuser with a heart of rock.  So when he has done wrong, as we all do, he may long to drown out the condemning voice of conscience.  He will be tempted to tell himself that the law is a fantasy, that there is nothing to be forgiven, that the solution to the problem of guilt is that there is no such thing – or that he is much better than he really is.

So for all these reasons – some logical, some psychological -- we do need God to be good.  An atheistic moral realism is logically possible only if we do not probe too deeply into the foundations of reason or into the reasonable moral life, and it cannot cure the roots of our moral fault.