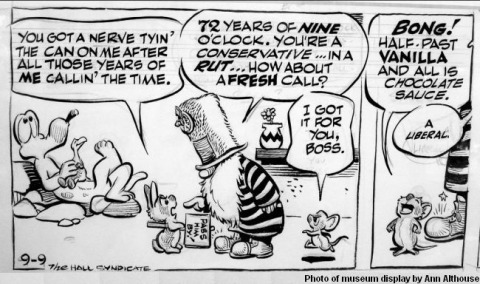 Though never nurtured in the lap of luxury, yet I admonish you,
I am an intellectual chap, and think of things that would astonish you.
I often think it's comical ... how Nature always does contrive ...
That every boy and every gal that’s born into the world alive
Is either a little Liberal or else a little Conservative!

Recently one of my students asked me to listen to a video of psychologist Jonathan Haidt arguing that liberals and conservatives differ not just in opinions but in personality.  Apparently it is making the rounds.

Haidt’s opening example is that liberals are more “open to experience” than conservatives.  To illustrate, he asks us to imagine a liberal, “Adam,” and a conservative, “Bill,” who travel to Italy and see Michelangelo’s David for the first time.  Adam is transfixed by its beauty.  Bill is transfixed by embarrassment, because of “the thing there in the center.”

The example is pretty silly.  Do we really gain anything by lumping beauty together with nudity and calling them both “experience”?  Such terms are overly broad.  What Haidt’s illustration really insinuates is that liberals are more appreciative of beauty (which I gravely doubt) and that conservatives are more embarrassed by seeing the thing there in the center (which may be true, though it probably depends on the setting).

There is a deeper problem with the emphasis on personality.  Although it may be true that liberals and conservatives tend to display different personality characteristics – and I do not fault Haidt for pointing this out -- it would not be helpful to make too much of the fact.  Human beings are made to know the truth, and we approach the truth by reasoning as clearly as we can.  Suppose you are explaining to your friend some of the reasons for believing that God exists, and he dismisses all your reasons by saying “You believe that only because you have a religious personality.”

That is not an argument, but a diagnosis.  Besides being insulting, it is a distraction.  Unfortunately, the substitution of diagnosis for argument is one of the great fallacies of our time.  You don’t hold an opinion, you have an “animus.”  You aren’t persuaded by reasoning, you have a “phobia.”

Diagnosis has a place.  It may be appropriate when the other person is irrationally resistant to argument, and you are trying to understand why.  But it is not in itself a reason for believing or disbelieving anything the other person thinks.  The present difficulty is that it makes your friend – how shall I phrase this? – insufficiently “open to the experience” of hearing you out.

Besides, character may be destiny, but personality isn’t.  Nothing prevents a person with a “religious personality” from being an atheist.  He will merely pursue his atheism religiously.