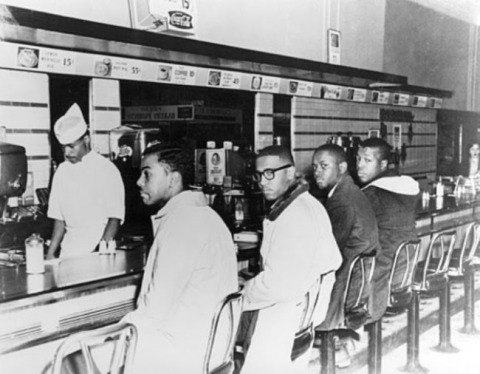 Some weeks ago I absent-mindedly scheduled this student question and answer for today, without reflecting on the case schedule of the Supreme Court.  The timing has been fortuitous.

Does natural law theory include an account of when one may disobey unjust human laws?  If so, when would it be permissible?

Before I begin, let me emphasize that we’re talking about peaceful disobedience – not rioting.  The last time I was asked about civil disobedience in the classroom, my questioner was looking for a way to justify the rioting in Baltimore.  Classical natural law theory will never give you that, because it tries to bear witness not only to the evil of unjust law, but also to the necessity of rightly ordered peace.

Within the natural law tradition, the classical account of civil disobedience is due to Thomas Aquinas.  He holds that true laws -- just laws in accord with the natural law -- generate a conscientious duty to obey simply because they are laws -- ordinances of reason for the common good, made by public authority and promulgated to everyone.  However an unjust law is no law at all.  It does not have the nature of law, but of violence.

Before going further we need to distinguish between two different ways in which a human enactment can be unjust.  In the less serious case the enactment is contrary only to the temporal but not the supernatural common good.  This may happen in three different ways:

There is a defect in its end or purpose.  The enactment might not even be aimed at the common good.  For instance, lawmakers may have enacted a particular regulation just to give unjust advantages to their cronies.

There is a defect in its form.  The enactment might violate the formal principle of justice, which is that each person should be given what he deserves.  For instance, the government might punish the innocent rather than the guilty, or it might systematically award civil service positions or entrance to public universities to the least rather than the best qualified people.

Suppose an enactment is contrary to the temporal common good, but does not demand of us any intrinsically evil deeds.  Remember that an unjust law is not a true law – it does not have the properties that make it suitable in itself to direct the acts of rational beings.  Now it would be absurd to say that we must obey a phony law because it is a law.  However, in some cases such an enactment may be obeyed not because it is a law, but simply to avoid harm to others.  For example, I might obey it to avoid causing disorder or confusion, or to avoid misleading persons of weak understanding who might be misled by my example.  Martin Luther King suggested an interesting amendment:  Rather than obeying an unjust enactment when disobeying would cause a confusing example, he suggested trying to find a way to disobey which would not cause a confusing example.

In the more serious case the law is unjust because it is contrary to the integrity of our relationship with God, who is our ultimate final good.  This happens when it does command intrinsically evil deeds.  For example, it may command murder, theft, dishonor to parents, or the profanation of holy institutions such as marriage, or express disobedience to divine command, acts which are by their very nature incapable of being directed to our ultimate final good.  In all such cases we must disobey.  Nothing whatsoever could justify obedience.