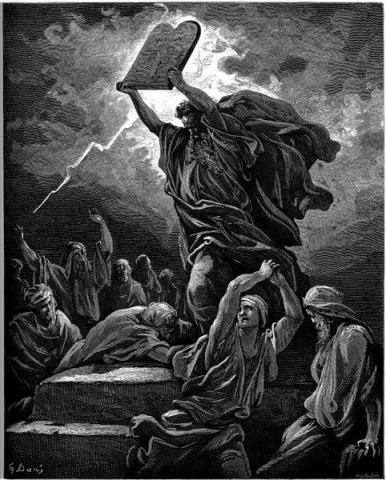 Mondays are reserved for questions from students.  This student is writing from Oxford.

My reason for thinking that he might is that some Old Testament commands seem to be contingent and not based on the nature or end of anything, for example dietary laws, or the commands to sacrifice Isaac or to war against the nations in the promised land.  It seems that only a divine command theory can ground commands like these, but this brings back the problems the natural lawyer sidestepped by adopting natural law theory instead of divine command theory.

One of these related problems is whether God can perform “moral miracles” – whether He can command something wrong and so make it right.  On a divine command theory this looks possible, but I’m not sure how it would work on a natural law view, since goodness depends on essences and goal directness, and so God would seem to need to change our essences for this act to be good.  But if God changed our essences, then it seems we would become something we aren’t.  We would cease to be human.

By a divine command theory, some people mean merely a theory which holds that the moral laws are, in fact, divine commands.  According to classical natural law theory, they certainly are.  God commands in one manner via the natural law (by incorporating certain potentialities for good into our nature, potentialities which can be realized only in certain ways), and in another manner via the Divine law (by making what we are to do explicit in the words of revelation).  But other people use the term “divine command theory” for a theory which holds that God can command anything whatsoever – a theory according to which the mere fact of its having been commanded would make it right.  Classical natural law theory denies this, because God cannot contradict His own being; he could not have commanded anything contrary to that justice and goodness which are identical to Himself.

To think of the matter another way, St. Thomas rejects both the view that the good is good just because God commands it (which makes God higher than good), and the view that God commands what He does because He is obeying an external standard of good (which makes good higher than God).  Both of these views make God and good different, but in fact they are the same.  God simply is the uncreated good.  He is identical to His own goodness, His own justice, His own will, His own wisdom, and so forth.

How then does natural law come into the picture?  Nature is what He has created, and natural law expresses its inbuilt norms.  Life, for example, is intrinsically directed toward preservation; marriage, toward procreation, and the union of the procreative partners.  Though God could have created a different nature than He did, He could not have created a nature that contradicted His uncreated goodness.

Your first question is about contingency.  Certainly, some commands are contingent, but this doesn’t mean that they are arbitrary.  Detailed laws can be derived from deeper principles in two different ways.  One way is by “conclusion,” which means strict inference.  To illustrate with ordinary human laws, murder is wrong, so by conclusion, murder by poisoning is wrong.  Such a law cannot cease to be right.  The other way is by “determination,” which means pinning something down that could have been otherwise.  For instance, we ought to take care for the safety of others on the roadways, but this might be arranged either by commanding that everyone drive on the right or by commanding that everyone drive on the left.  This is changeable.

Tomorrow I’ll continue this discussion by answering your question about “moral miracles.”