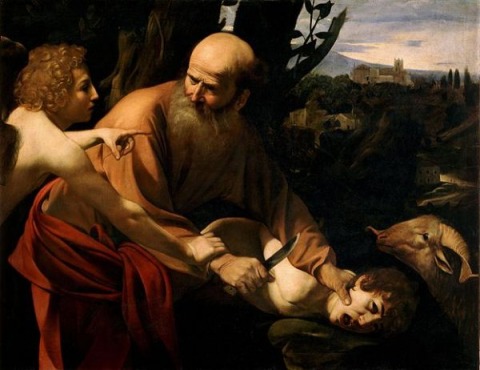 Continuing my reply to yesterday’s letter from a student:

Your second question is about what you call “moral miracles.”  Can God make it right to do what is intrinsically wrong, just by commanding it?  This question arises especially for those who not only accept natural law, but also accept the Bible as authentic divine revelation.

The answer is no.  Omnipotence does not mean that God can do literally everything.  He cannot act against that goodness are justice which are identical to Himself.   In particular, not even God can make exceptions can be made to the precepts of the Decalogue, such as “Do not murder” and “Do not commit adultery,” because they embody or “contain” God’s very intention to justice and the good of all His creatures.  To ask whether He could command such things is to ask whether God could be other than God.

St. Thomas Aquinas argues that on the other hand, God can declare exceptions to certain more detailed arrangements, arrangements which further His intention to justice and the common good only in some cases, not in all.  For example, God will never command theft.  But theft is taking away property unduly – taking away property which the other party does not deserve to lose.  Under ordinary circumstances it would have been theft for the Hebrew people to demand spoils from the Egyptians when they left the country of Egypt.  But God, as judge, decreed these spoils as a just punishment to the Egyptians for having subjected the Hebrew people to slavery.  Because of this judgment, the taking of spoils was not theft, just as it would not theft for you to be sentenced by a court to pay a fine as the punishment for some crime.

Much more troubling to many people is God’s command to Abraham to sacrifice Isaac.  To you it seems that this may be a “moral miracle,” the conversion of sheer wrong into right just by commanding it, because it looks like a command to commit murder.  In the Thomistic analysis, God cannot command murder.  But murder is the undue taking of human life, and it is not murder if a just judge sentences a person who is guilty of capital crime to death.  Ever since the fall, all human beings had been under sentence of death for rebellion against God, and the Redeemer had not yet come.  God -- the divine judge who decrees this sentence -- can also decree the time and manner in which it is carried out.  If He decrees that in the case of Isaac, Abraham should carry it His sentence in the manner in which sacrifice is carried out, then although there is a strong departure from what would normally constitute murder, there is no departure from the prohibition of murder per se, because the act is not murder.

Disturbing as it is, I think this analysis of the story is correct.  We tend to misunderstand the story’s point because we read our own preoccupations into it instead of trying to understand what it is actually about.

The point of the story is certainly not that fathers may kill their sons at will, for the decision was not Abraham’s.  No human being can make such a decision.

Nor is the point that God can command anything.  God was acting here as a just judge, not as an arbitrary tyrant.

Nor is the point that God Himself desires child sacrifice.  In the first place, God intervened to stop Abraham before he actually committed the act.  In the second place, later in the Old Testament, God forcefully and repeatedly makes clear that He abhors child sacrifice, and that he condemns the nations which practice it.  But Abraham does not know that God abhors it.  He comes from a culture in which child sacrifice is common, and for all he knows, a god might desire such a thing.  Whether children may be sacrificed is just not the issue for him.

Nor is the point that every seeming divine appearance really is one.  We, living much later in history than Abraham, our consciences formed by a great deal more instruction, have the advantage of knowing that God abhors child sacrifice.  So if you hear what sounds to you like a divine voice commanding you to kill your son or daughter, you may be utterly sure that it is a delusion.

Then what is the point of the story?  For Abraham there is only one question:  Whether or not he will trust God to keep His promise to give him descendants.  Such trust is severely trying for Abraham because he and his wife are far beyond the normal age of childbearing, and Isaac is their only son.  The point is that he trusts God anyway.  Notice, too, what happens at the end of the story:  After putting an end to the proceedings and rescuing Isaac, God Himself supplies a ram as a substitute sacrifice.  In a later age, the Church took the substitution of the ram as foreshadowing the substitutionary sacrifice of Christ – the means by which at last we can be set free from the universal sentence of death.

St. Thomas discusses other acts you might consider “moral miracles” too.  For example, it might seem at first that God commanded the prophet Hosea to commit adultery, because He commanded him to marry a woman who lived like a whore.  According to St. Thomas, not even God can command someone to have intercourse with a woman who is not his wife.  Such a command would be contrary to the divine intention of purity which God built into human nature in the act of creation.  But God is the author of marriage; it follows that if God, for special reasons, commands Hosea to take a particular woman as his wife – even a woman who would otherwise have been regarded as unsuitable -- then by the very fact of the command, the woman is Hosea’s wife, and he is not committing adultery.

You mention that your questions came to you as you were reading my Commentary on Thomas Aquinas’s Treatise on Law.  I’ve included additional discussion of this sort of thing in the online Companion to the Commentary, which continues into selections from Questions 98-108, concerning the Old and New Testament divine law.  God bless your investigations.