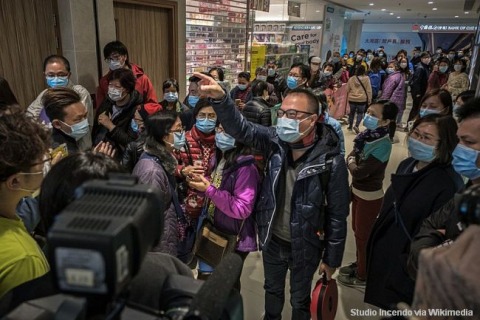 A great many people are asking how the coronavirus will change us, but that is not the right question.  The only way the virus can change us is to make us sick, God forbid.  Any other changes will come about not because of the virus itself but because of our response to it.  All in a rush, we are making the decisions that will change us right now.  The right question, then, is which ones we are making.

For example:  Maybe not – but families fed up with ever-increasing cost and the ever-decreasing content of college education might demand massive reductions in expensive classroom instruction.  Since the school refuses to refund my kid’s tuition on grounds that he’s still getting the same educational value online, why not teach all courses that way?

Maybe not – but persons whose sense of their faith is already iffy might slack off from the practice of worship and participation in the sacraments.  If even my pastor says I should just watch the service online during the epidemic, why couldn’t I do that every week?

Maybe not – but panicky citizens might stop complaining about governmental interference with religious institutions.  Here and there a few small churches and synagogues have continued holding public worship services, perhaps reflecting that if ever people needed God, they need Him now.  Responding to those few, the mayor of New York City threatened not just to prevent these churches and synagogues from holding large public meetings during the epidemic, or prevent them until the epidemic is over from violating social distancing guidelines -- which would not have been unreasonable -- but to permanently shut them down.  He has no authority to do so, but that does not make it unimportant that he wanted to and thought that he did.  Will such bullying become a precedent?

Maybe not – but fearful of widespread economic collapse, voters might be all too ready to exaggerate the power of government and to think that there is nothing special about a competitive economy free of constant, pervasive political intervention.  How the economy works is not widely taught, and many think “free market” is a synonym for “greed.”

Maybe not – but the shift of power and initiative from the states to the central government, nothing new in itself, might accelerate.  To many people, the idea that the states might be laboratories capable of making their own decisions, perhaps even trying out new responses to the emergency, seems a useless abstraction.  When citizens are afraid, the urge to have the federal government control and direct everything is strong.

Maybe not – but we might see the yearning to turn everything over to technocrats become even stronger than it already is.  How many times have you heard it said that politicians should get out of the way and let “the scientists” do their work?  But experts are political too, and even if they weren’t, what policies to make in view of competing economic and epidemiological models is a political decision.

Maybe not – but global trade might become even less popular.  I count myself a free trader, but even most free traders can see danger in relying on overseas providers for goods crucial to national health and security – especially when the interests of the countries from which we get them may be opposed to our well-being.

Maybe not – but the configuration of international politics might change, as the statements and declared intentions of the totalitarian rulers of China concerning the crisis fall further into disrepute.

These are only could-bes and might-happens.  In another two years, things will look different.  But we should be thinking right now about what we are doing to shape them.