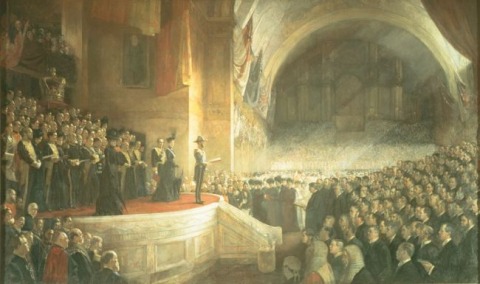 To make and evaluate laws, one must always consider the circumstances.  Viewing former ages from the perspective of our own narrow slice of time, it is easy to overlook this fact.  Consider, for example, the legal rule in the Old Testament book of Deuteronomy that if a man seizes an unmarried woman to have sexual intercourse with her, then he must marry her:

“If a man meets a virgin who is not betrothed, and seizes her and lies with her, and they are found, then the man who lay with her shall give to the father of the young woman fifty shekels of silver, and she shall be his wife, because he has violated her; he may not put her away all his days.”

Today we think “How brutal is this so-called Law of God!  The poor young woman is forced to marry her rapist for life!”

Such a complaint misses the point very badly.  It was the times that were brutal, not the law; the nation was only one step removed from paganism.  In the only way reasonably possible, the law was gradually humanizing it.  Women had low status, and marriage was protection.  An unmarried young woman who had been violated or seduced would have been held in shame.  Had it not been for the rule, no one would have been willing to marry her, and even if her father felt sorry for her, he would have resented having to provide for her because there would be no one to pay him a bridal gift.

The right way to think of the rule, then, is not that it forces the young woman to marry the man, but that it spares her the shame of having been his unmarried sexual plaything.  It is he who is forced, not her, because to compensate for what he has done to her he must shelter her for the rest of his days, treating her not as a concubine but as a true wife, never being able to divorce her or cast her off.

The image is The Big Picture by Tom Roberts.

Greetings to my readers Down Under.