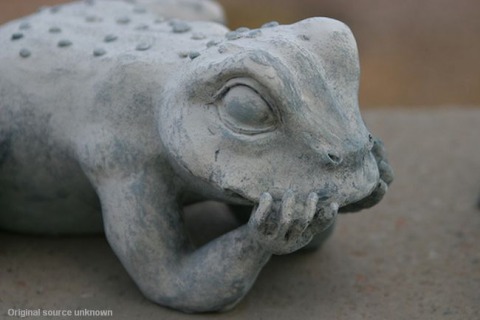 Isn’t it curious that tattoos, piercings, and scarifications are considered cool, but circumcision is considered a barbaric mutilation?

I wonder why pundits describe certain politicians as ideology-free, since that’s not possible.  Everyone has some view of the world.  Besides, even what we call an unprincipled person assumes the truth of one principle:  The one that states that people like him are the smartest and ought to rule.

Someone sent me a letter arguing that the abortion of unwanted babies should be legal because they should not be “forced to live a ceaseless hell.”  Observe that the argument would also apply to the destruction of the unwanted weak, poor, sick, sad, and aged.

Part one:  “I prefer to spread the Gospel by example, not by words.”  It is always impressive to come across someone so far advanced in sanctity that people are awed just by seeing him go about his life.  But unlikely.

Our grandparents knew that the rhyme about little girls being made of sugar and spice but little boys being made of snakes and snails was an affectionate jest.  For us it is hardening into dogma.

Part two:  Suppose you really are so far advanced in sanctity.  Even so, without words, isn’t it more likely that people will attribute whatever good they see in you to the wrong cause?

Question:  When the knight came upon the dragon, did he estimate whether the dragon could be overcome in his lifetime?  No.  He stood up and fought.

Odd comparison:  “Believing in God is like believing in Zeus.”  They aren’t even “gods” in the same sense of the term.  Zeus was a contingent being which something else caused to exist.  God is the necessary being who causes all else to exist.

The people of the future will certainly not view our age as golden, but they may look back on it as epic.  In our day the exercise of even the everyday elements of moral character, such as honesty and chastity, is beginning to look like heroic virtue.

Suspicion:  The most powerful reason why some persons want to coerce conscience – for example, to force medical workers who object to abortions to participate in them anyway – is to have as much company as possible in their own bad conscience.

I wonder why the Old Testament prophets are pegged as hurlers of harsh condemnations.  They seem to have spent more time weeping.  Their judgments were warnings; they sprang from divine compassion.

Why is it said that believing in the doctrines of the Church makes one a “conservative Catholic?”  It would be closer to the truth to say that it made one a Catholic.

With due respect to Mr. Dylan:  Some people do need a weatherman to tell which way the wind is blowing.

Subtlety is discerning in an appealing error the truth that it includes but distorts, and not being caught by the distortion.

The proper use of blunder is the acquisition of insight.  How much more deeply the sages of the future will understand certain matters, having studied the annals of our mistakes.