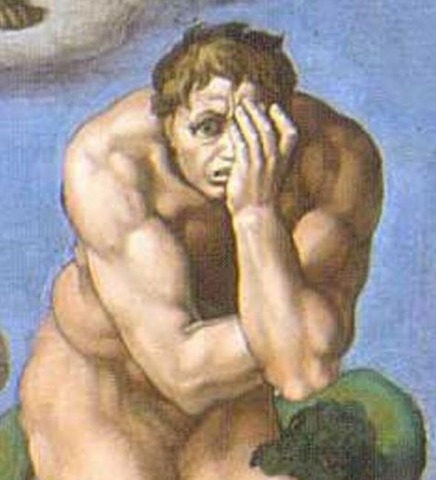 Though sin dreadfully thwarts the fulfillment of the principles by which our nature operates, not even sin can obliterate them.  Our nature, though wounded, persists.

St. Thomas Aquinas explains with a pair of analogies.  The first of these is the effect of clouds on glass.  A transparent body has an inclination or readiness to receive light, from the very fact that it is transparent.  Yet although this readiness always remains rooted in its nature, it is diminished by clouds which get in the way of the sun.  In the same way, although we have a naturally inclination to virtue, sin diminishes it, not by destroying our nature, its root, but by impeding our nature from achieving its end.  This can go on and on, because even if man goes on adding sin to sin, his nature, which is the root of the inclination to virtue, remains.

Lest anyone misunderstand the first analogy and underestimate the seriousness of sin, St. Thomas’s second analogy is blindness.  Even in a congenitally blind man, the potentiality for sight is still naturally present in the sense that he is an animal of a sort which is naturally endowed with sight.  Yet this aptitude is not actualized or fulfilled in him, because something has prevented the proper formation of the eye.  In the same day, the natural inclination to virtue persists even in the lost.  If it didn’t, they would not suffer the remorse of conscience. However, the inclination to sin is not actualized in them because they have been deprived of grace by divine justice.

The fact that not even sin can obliterate the inclination to adhere to God's law may seem comforting.  It isn't, for what it really means that the wicked man is divided not only against God, but against himself.  This division begins right now, in the present life.

St. Thomas argues that because the wrongdoer disturbs three different orders -- his own reason, human law, and Divine law -- so he receives a threefold punishment, one inflicted by himself, one by man, and one by God.  The one which he inflicts on himself, remorse of conscience, is united to the one which is inflicted by God, the withdrawal of His presence, because conscience is the interior testimony to God's law.  Whenever a man acts against conscience, "he has by this very fact decided not to observe the law of God."