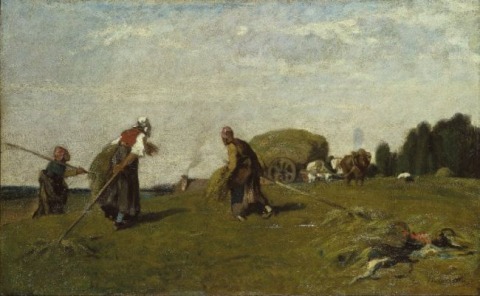 Our perception of meaning in the human person is manifold, for the entire fabric of our nature, extending through all its dimensions, chants to us of inbuilt purposes.  Sexuality is no exception.  Our bodies sing of the complementarity of the male and the female, and our spirits sing along in polyphony.

The psalmist says that in consideration of the heavens, he is moved to ask “What is man, that Thou art mindful of him?”   In consideration of the yeast and the amoebas, we might also ask “What is man, that Thou hast made him different?”  For yeast do not long for union with other yeast, nor amoebas for communion with amoebas.  Yet among us there are two polaric kinds, each of them unbalanced and incomplete.

The male is created with a potentiality for biological or spiritual fatherhood, the woman with a potentiality for biological or spiritual motherhood.  Certain soft chords in her nature resonate more powerfully in his nature; certain pale hues in his nature glow more luminously in hers.  Paradoxically, we are not less because of this incompleteness.  We are more.  There is more melody, more color, more laughter in the world because there are two kinds of us.

A husband and wife uniting in love in the hope of having children is a more splendid thing than meiosis or parthogenesis or budding, for it makes possible a kind of love that would otherwise not exist:  A life which gives rise to new life.

Same-sex intercourse misses the point of all this.  Not only is it intrinsically non-procreative, incapable of forming new life, but for all the talk of activists about fulfilling relationships, it is also intrinsically non-unitive.  Two men, or two women, cannot balance each other in the utterly distinctive way that a woman and a man do.

Friendship between two persons of the same sex is a gift -- but sexualizing such friendship subverts it.  The joining of a man’s and a woman’s sexuality can bring them into equilibrium; the joining of the sexuality of two men or two women pushes them out of equilibrium.  This explains many things.  Consider for example the explosive promiscuity of the male homosexual world, and the fact that in general, males in stable male partnerships don’t stop cruising but only cruise less.

We see then that to sing against the harmonies of our creational design is to produce discord in ourselves.  Even if our aim is to reduce interior discord by warbling in the key of our desires, we cannot succeed, because we are still out of key with our design; the reality of being male and female is something that we are, not just something that we want.  A man who is sexually attracted to other men is a man who suffers appetites that cut across the grain of what he truly is.  A woman who is sexually attracted to other women is a woman whose longings are out of alignment with what she truly is.

These facts subsist at a level deeper than ideology, deeper than choice, deeper than desire.  Our desires may overwrite them, but they can never be erased.

Tomorrow:  Part 4.  This seven-part series is adapted from my chapter in a book to be published by Ignatius Press.