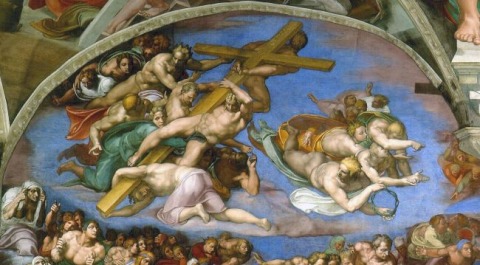 The sense that I might die really has me questioning my faith and my certainty of heaven.

I wasn’t afraid when I was a Protestant, believing that “once saved always saved.”  I remember the freedom and peace I felt knowing that it was a done deal.

Now, as a Catholic, intellectually I agree that “once saved always saved” isn’t true, but I’m really struggling with anxiety about where I will go when I die.  I miss the certainty about meeting Jesus that came with being Protestant.

What am I missing here?

I sympathize, but I think you worry about your feelings too much.

You feel anxiety about where you will be after death, and so you blame the Catholic teaching that it is possible to fall from grace.

But think:  Only those who turn their backs on God through unrepentant sin die as exiles from grace.  So it is unreasonable for you to obsess about where you will be after death unless you are planning to turn your back on Him!

It is also unreasonable to believe in a God who brings those who turn their backs on Him into His eternal presence.  And even if He did, how could they want to be there?  He is the very thing they are avoiding; they refuse to recognize their greatest good.

You imagine that your anxiety results from Catholic teaching, and that Protestant teaching would make you feel better.  Far be it from me to say that feelings are the test of truth – but do you know that I get letters like yours more often from Protestants than from Catholics?  People who do believe “once saved, always saved,” can also suffer tormenting worry about where they will be after death.

You see, you are anxious because you think, “Maybe I will lose my salvation!  How can I know that I won’t?”  But they are anxious because they think “Maybe I was never saved in the first place!  How can I know that I was?”  No doctrine, whether Protestant or Catholic, or for that matter atheist or pagan, guarantees that you will always feel bouncy.

And would it be good if you always did?  As St. Augustine writes, those who love God learn from His correction “that their rejoicing on the right path ought to be with trembling, and that they should not arrogantly rely on their own strength to stay on it, nor say in their prosperity, ‘We shall not be disturbed.’”

So trust Christ, who is “mighty to save,” strong to preserve you in His grace, and then cooperate obediently with that strength.  Salvation doesn’t depend on you, but on Him.  That means, among other things, that it doesn’t depend on your feelings, but on grace.  And that should make you feel better.