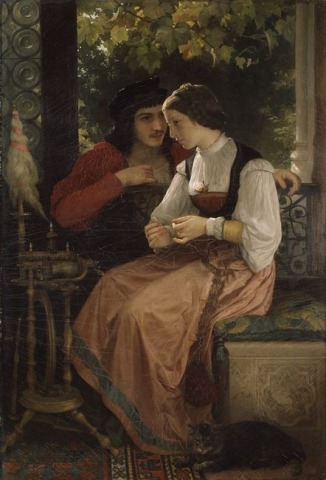 Seduction is persuading someone to commit a moral wrong which the person might not otherwise have committed by manipulating the person’s own motives.  Its particular brand of loathsomeness is that it draws the victim into the seducer’s guilt.

To be perfectly clear about which wrongs we are speaking about, please understand that I am speaking of adult persons, and I am not speaking of using force or threats.

Usually, the word “seduction” is used for seduction to sexual intercourse; this is the focal meaning of the term.  Surprisingly, the kinds of illicit persuasion we find easiest to condemn are the non-focal kinds, for example seduction to commit fraud or theft – for which we usually use different terms.  In fact, we find it so difficult to criticize seduction in the focal, sexual sense that the term “seduction” has almost dropped out of our language.  It sounds curiously old-fashioned.

Yet seduction was not always so difficult to mention or condemn.  Along with pandering, it earned an entire circuit of torment in Dante’s version of hell.  Why is it so difficult in our own times to admit that seduction is wrong?

The answer:  Because even though the object of a successful seduction may not have initially welcomed the seducer’s advances, he or she does give consent in the end – and in order to rationalize our own bad behavior, many of us have welded our minds to the view that nothing done with the consent of both parties could ever be wrong.

This is why, on those rare occasions when we do condemn seducers, we don’t condemn them for seduction itself.  To condemn them at all, we have to pretend that consent never took place, so that what they really did was something other than seduction, such as rape.  Rape also happens, and sometimes an unsuccessful seduction turns into a rape.  But seduction, as such, is not rape.

Seduction is the unmentionable sin, the sin of which we dare not speak, lest doing so undermine our pretense that everything to which we consent is all right.