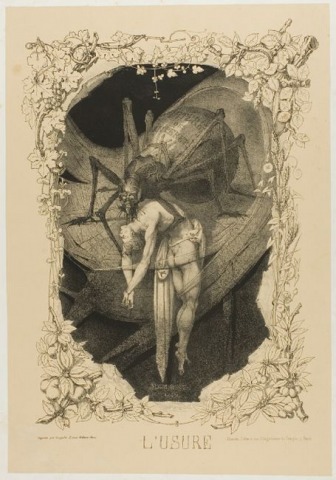 Can you offer some guidance on a very loaded topic:  Usury?  I am a convert who works in the financial services sector, and I am wondering if I’ve been continually participating in, or at least cooperating with, grave sin.  For over a century, the Church has said very little about usury.  But it was regarded as a grave sin for more than a millennium, none of the definitions have changed, and by those definitions it seems to be systematically and hopelessly entrenched in our daily lives.

Over the course of Church history, the rule has often been taken as forbidding all charging of interest whatsoever to fellow members of the community.  However, it is at least possible to argue that this interpretation misses the point.  The question is the sense in which the passage refers to “your brother.”

Let’s distinguish between loaning to someone because he is in want, and loaning to him because he wants to invest the money in an enterprise and make a profit.  If “your brother” means your fellow who is in want, then the passage prohibits exploiting the poor:  After lending them what they desperately need, one may not then demand that they give back even more.  But if “your brother” means all of your fellows, then it prohibits all charging of interest to those who belongs to the nation of Israel.

Scripture often praises lending to the poor, and two other passages of the Law which condemn taking interest do make clear that the context of the prohibition is loans to the poor:

●  “If you lend money to any of my people with you who is poor, you shall not be to him as a creditor, and you shall not exact interest from him.  If ever you take your neighbor's garment in pledge, you shall restore it to him before the sun goes down; for that is his only covering, it is his mantle for his body; in what else shall he sleep?  And if he cries to me, I will hear, for I am compassionate.”  (Exodus 22:25-27, RSVCE.)

●  “And if your brother becomes poor, and cannot maintain himself with you, you shall maintain him; as a stranger and a sojourner he shall live with you.  Take no interest from him or increase, but fear your God; that your brother may live beside you.  You shall not lend him your money at interest, nor give him your food for profit.”  (Leviticus 25:35-37, RSVCE.)

Taken this way, the prohibition of usury forbids taking unfair advantage of those who are vulnerable, and this makes it a natural extension of the Commandment against stealing, because stealing is another kind of injustice with respect to property.  The prohibition of using one standard of measure for buying and another standard of measure for selling, which is a form of fraud, is another such extension:  “You shall not have in your bag two kinds of weights, a large and a small.  You shall not have in your house two kinds of measures, a large and a small.  A full and just weight you shall have, a full and just measure you shall have; that your days may be prolonged in the land which the Lord your God gives you.  For all who do such things, all who act dishonestly, are an abomination to the Lord your God.”    (Deuteronomy 25:13-16, RSVCE.)

The question may arise, “If the idea is to forbid financial subterfuge and plundering, then why not simply declare ‘Commit no financial subterfuge or plundering’?”  Because although that is a good moral principle, it does not have enough precision for the regulation of a community.  The very purpose of the additional precepts is to provide the necessary exactness.

Various nations, philosophers, and religions have prohibited charging interest on loans, considering it the taking of unfair advantage.  From the perspective of the demand theory of value widely held today, this is difficult to understand; it seems absurd to view charging interest as unfair, because a thing (in this case the use of borrowed money) is deemed to be worth whatever price people are willing to pay for it (in this case interest).  However, for people who are borrowing not to expand their business, but to eat, and who might starve if they do not borrow, this way of thinking seems harsh.

Aristotle thinks another reason for holding the charging of interest in suspicion is that unlike someone who invests his money in a productive activity such as a farm, the lender seems to get something for nothing.  He writes, “There are two sorts of wealth-getting, as I have said; one is a part of household management, the other is retail trade: the former necessary and honorable, while that which consists in exchange is justly censured; for it is unnatural, and a mode by which men gain from one another. The most hated sort, and with the greatest reason, is usury, which makes a gain out of money itself, and not from the natural object of it. For money was intended to be used in exchange, but not to increase at interest. And this term interest, which means the birth of money from money, is applied to the breeding of money because the offspring resembles the parent. Wherefore of all modes of getting wealth this is the most unnatural."  (Politics, trans. Jowett, Book 1, Chapter 10.)

On the other hand, if the charging of interest is not allowed, then why would anyone loan money at all?  Certainly not as a shrewd business practice.  He would have to be motivated by love of neighbor.  In this case lending money becomes a form of friendship or aid to the poor.

Some, seeking to harmonize the ancient suspicion of interest with modern banking practice, suggest that although perhaps some charging of interest is getting something for nothing, not all of it is.  After all, the lender is giving up the use of money which he might otherwise have put to productive use, and so, they say, it is not unreasonable to compensate him for his loss.  From this point of view, the crime of usury should be viewed not as charging interest per se, but as charging interest in excess of the lender’s opportunity cost.

That is a plausible objection to Aristotle’s economic argument against charging interest.  However, it is not a sufficient objection to the charitable argument – that one should lend money not to make money, but to help one’s brother, especially if he is in need.  From this point of view, one might say that modern banking practice presupposes that nobody counts as one’s brother.

In response to the hypothetical objection that Torah should have prohibited not just charging interest to strangers, but all charging of interest, St. Thomas replies that the Law did not intend that the Israelites take interest on loans to aliens, but only tolerated the practice.  The people were prone to an excessive desire for wealth (as people are today), and would be more peaceful toward aliens if they were able to earn something through their dealings with them.

Other issues come into the picture too, but this may give you a start.

Which is NOT THE SAME as

(but you can read that too)