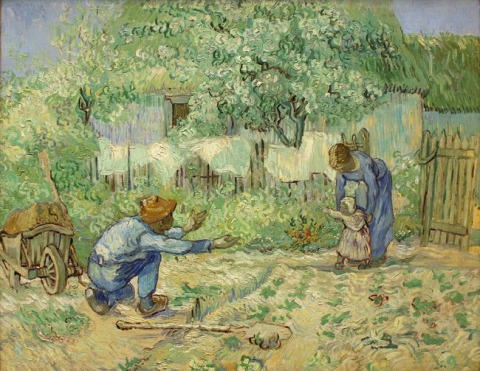 The First Commandment’s prohibition of worshipping false gods concludes with the warning that God “visits the iniquity of the fathers upon the children to the third and the fourth generation of those who hate me.”  Notwithstanding the fact that Deuteronomy also declares that He “keeps covenant and steadfast love with those who love him and keep his commandments to a thousand generations,” generational consequences are often held to impugn His justice and deny the principle of responsibility, for they imply that some will suffer for the sins of others.

But don’t some always suffer for the sins of others?  The natural consequence of sin is that damage ripples not only through me, the sinner, but outward in every direction.  God could have made a world in which nothing had consequences, nothing had meaning:  A world in which, among other things, children turned out the same no matter how their parents raised them.  In that case, why bother with parents at all?

He bothers with parents because He chose to make a world in which finite rational creatures are given the astounding privilege of imitating His Fatherhood and participating in the wisdom by which He governs the universe.  By the fact of raising my children, for good or ill I am also helping raise my children’s children’s children, the privilege is not taken away, but intensified.

With the privilege comes responsibility, for failure to live up to it causes real hurt to others; the obverse of the power to do good is the power to do harm.  If I am a bad father, my children may find it more difficult to trust the Fatherhood of God.  If I adore that which is not, I pave a path that they may walk on too.  So the generational penalty is real – but it is the other side of a blessing:  We are placed in a universe in which what we does matters.

Yet God’s providential care may also mitigate some of the temporal consequences of forgiven sin.  In view of the repeated sins of the people, Moses implores God,

“Now, I pray thee, let the power of the Lord be great as thou hast promised, saying, 'The Lord is slow to anger, and abounding in steadfast love, forgiving iniquity and transgression, but he will by no means clear the guilty, visiting the iniquity of fathers upon children, upon the third and upon the fourth generation.'   Pardon the iniquity of this people, I pray thee, according to the greatness of thy steadfast love, and according as thou hast forgiven this people, from Egypt even until now.”

God replies that although He will grant the pardon for which Moses has asked, there will still be a penalty for those who saw His glory and signs and yet despised Him.  Yes, their children will enter into the Promised Land, but they will not.