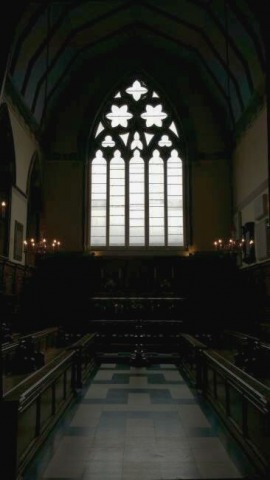 For all you audiophiles, the audiofiles of the talks at the colloquium on “Aquinas and the Development of Law,” which took place last week at Blackfriars, Oxford University, are already posted online.  The four talks were by Richard Conrad, O.P, Ryan D. Meade, Jonathan Price, and me.  My own, which is also posted on this website’s Talks page, posed the question “Of Course Human Law Develops.  Can Natural and Divine Law Develop?”

The colloquium was enjoyable, the brothers most hospitable, and Oxford, beautiful.  I shot the image of the Blackfriars chapel, above, with my cellphone.  The light was poor, but I rather like the effect.

I have tried to imagine the University of Texas having constituent units which are explicitly Christian, but I can’t do it.  It is a fascinating arrangement.