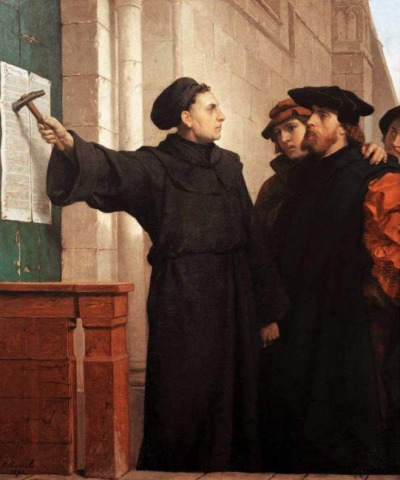 The other day my students in a class on the American Founding were reading some “election day sermons” from the period.  Election day sermons were a very big deal:  They were long, detailed talks about the political rights and duties in the eyes of God, given to state legislatures by invited ministers on the days when newly elected representatives took their seats.  Many of my students are surprised to find that the Founders thought God important – they tell me their education has never mentioned it.

Since some of these election day homilists sharply criticized Catholics, a number of the students wanted to know how Catholics differ from Protestants.  That’s a harder question to answer than you might think, and I hope my readers will judge this effort charitably.  For people who want to understand Protestant-Catholic disagreements encounter several difficulties.

One difficulty is that although the Magisterium speaks for Catholicism, no one speaks for Protestantism.  There are tens of thousands of Protestant denominations, and not all of them even believe in having faith statements or creeds.  We can get partly around that difficulty by speaking of what most, many, or some Protestants believe.

Another difficulty is that the Catholic Church is often said to teach things that bear no resemblance to her actual teaching.  When I was a boy, I was taught the canard that Catholics believe in worshipping idols, and I’ve run into people who are convinced that Catholics think Mary is a goddess.  We can get around that difficulty too, by reading what the Magisterium says the Church believes instead of what opponents say the Church believes.  The opponents, of course, include some Catholics.

But there is still another difficulty, and this one is much greater.  For it isn’t always easy to distinguish real disagreements between Catholics and Protestants from merely verbal ones.

For example, Catholics and Protestants often use the word faith differently.  Thus,

●  When Protestants, or most Protestants, say we are saved by faith alone, they usually mean that we are made right with God by totally receiving Christ into ourselves, heart and mind and soul.  But Catholics believe this too.

●  When Catholics deny that we are saved by faith alone, they usually mean that we are not made right with God merely by intellectual belief, by the mind without the heart; we must be conformed to Christ.  As St. James wrote, “Even the devils believe – and they tremble.”  But many Protestants believe this too.

Another example is that Protestants and Catholics often use the word works differently.  Thus,

●  When Protestants, or most Protestants, deny that “works” or deeds play a role in our becoming right with God, they usually mean that we can’t earn our way into God’s approval by anything that we can do by our own human power.  We can neither forgive ourselves nor fix our own brokenness; only God can.  But Catholics believe this too.

●  When Catholics say that works do play a role in our becoming right with God, they mean what St. Paul meant when he said that we are saved by faith “working in love.”  We have to cooperate with the divine grace that fixes our brokenness, pouring back out the love that is poured into us.  Even so, cooperation with grace isn’t a “work” in the sense of something that we perform by our own power, for the virtues of faith and love are supernaturally infused by God, and the ability to cooperate with the gift of grace is itself a gift of grace.  But many Protestants believe this too.

So whatever the differences between Catholics and Protestants concerning faith and works, they are subtler than the catchphrases often used to refer to them.

On the other hand, there certainly are a number of real, important disagreements, divisions that are not merely verbal.  For example, most Protestants believe that what Catholics and some Protestants call “sacraments” are mere symbols.  By contrast, in the felicitous phrase of philosophers Peter Kreeft and Ronald Tacelli, Catholics believe that the sacraments are “symbols plus.”  For example, the water of baptism is certainly a symbol, but it is more than just a symbol, for it symbolizes what the grace of God is actually doing by means of the water at that very moment – giving someone spiritual rebirth through Christ.  This view of the sacraments has further implications.  It means, for instance, that the sacraments aren’t just ritual performances, but the very lifeblood of sharing in God’s life, and that one doesn’t become a Christian just by saying “Okay, I’m a Christian now.”

Another example is that many Protestants believe in the principle sola scriptura, “Scripture alone.”  Although Catholics agree that the biblical Scriptures are true and authoritative, they deny the sola, the “alone,” because they do not consider the bible self-interpreting – in their view, it must be understood in the light of Apostolic tradition and with the guidance of the Holy Spirit, through the Church.  In their view, if we followed the principle sola scriptura, then we would have no way to know what counts as scriptura in the first place, for the canon of Scripture did not establish itself.  It was established by the Church, which St. Paul calls the “pillar and bulwark of the truth.”

Now it gets complicated, for on the other hand, many Protestants believe in “imputed righteousness.”  This means that God declares the redeemed person as just and acceptable in His sight, even though the person may be rotten and crumbling with sin on the inside.  By contrast, the Catholic view is that when God declares the redeemed person just and acceptable in His sight, He says this because it is true – His grace actually changes the person inwardly from a rebel to a friend (albeit a friend who still needs a very great deal of interior repair).

Even in discussing the last difference, verbal difficulties get in the way of identifying the actual point of disagreement.  For consider:  The Protestant Reformer, Martin Luther, is famous for saying that redeemed persons are simul iustus et peccator, “simultaneously just and sinners.”  Catholics say this couldn’t be, because to be a sinner is to be in a state of rebellion against God, and one cannot be both friends with God and in rebellion against him at the same time.  Yet part of the problem may be that many Protestants use the term “sinner” not only for persons in rebellion against God, but also for persons who merely possess inclinations to sin.  After all, both sides agree that we may possess inclinations to sin and yet be resisting them and obediently submitting to the Divine Surgery.  One could perhaps be called simultaneously just and a sinner in the latter sense – but Catholics consider this way of speaking dangerously misleading, because it uses the same term for enemies of God and for friends who are in difficulty.

There are a lot of other disagreements too, but perhaps you can see what makes understanding them difficult.  For centuries, Protestants and Catholics have been “talking past” each other.  Some theologians involved in inter-religious dialogue think that the two sides are finally getting closer, just because each is paying closer attention not just to what but also to how the other speaks.  A milestone in this dialogue was the Joint Declaration on the Doctrine of Justification signed by the Catholic Church and representatives of the Lutheran World Federation in the late ‘nineties.  The doctrine of justification concerns how a person becomes just and acceptable in the eyes of God.  Although the two sides hardly became one, they reached sufficient agreement to withdraw the mutual anathemas of the Reformation era – which is stunning.

At the time, when I was still firmly Protestant, the Joint Declaration struck me like a thunderclap.  Reading it, recalling Luther’s words that justification was the article on which the Church stands or falls, I thought to myself, “The Reformation is over.  Now it’s just a matter of time.”  Reaction among well informed Protestants whom I knew was quite different.

Most were simply indifferent.  Intuitively even if not doctrinally congregationalist, they viewed all faith as local:  Who cares what these ecclesiastical bodies said?  Among those who did take an interest, some held that the agreement was merely verbal, a trick of ambiguous wording, signifying nothing.  Others held that it was real but unimportant, because the article on which the Church stands or falls isn’t justification, as Lutherans say, but the sovereignty of God, as Calvinists say (what has Wittenburg to do with Geneva?)  Still others held that it was real, but that the representatives of the Lutheran World Federation did not speak for their views, or even for all Lutherans.  A sizable group conceded that the Declaration would be important if the Catholic Church meant what she said, but that this would have required renunciation of the Council of Trent, therefore, she must have been lying.