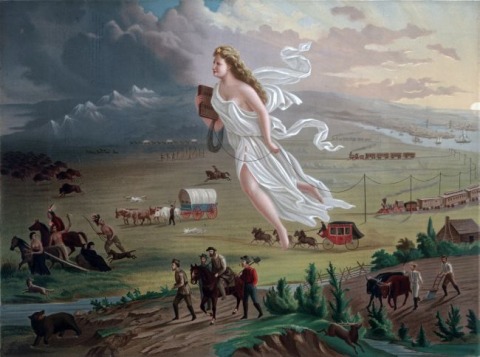 As its name suggests, progressivism wants to make progress.  This would seem to mean that it wants to achieve new things that are good, and leave behind old things that are bad.  Who wouldn’t be for that?

But to know whether you are making progress or not, you need an objective standard of what is good.  In short, you need the natural law.

The problem is that natural law is one of the things progressives want to get rid of.  They consider belief in natural law reactionary, because they think all principles of morality and justice are subject to change.  You do whatever works.

But in this case they are trying to progress beyond the very standard by which progress can be gauged.

For without an objective natural law, progress cannot be distinguished from regress.  You can’t even distinguish what “works” from what doesn’t.  There is only meaningless turbulence and purposeless alternation, according to the whims of the moment.

You might also try another way of rescuing progressivism from incoherence.  You might say that whoever wins is right.  And you might do whatever it takes to win, because then winning would make you right.  That describes a lot of progressivism pretty well.

But in this case, you haven’t escaped from belief in an objective morality after all.  You have merely tumbled into the belief that the one and only thing that is ultimately right and good is power over others.