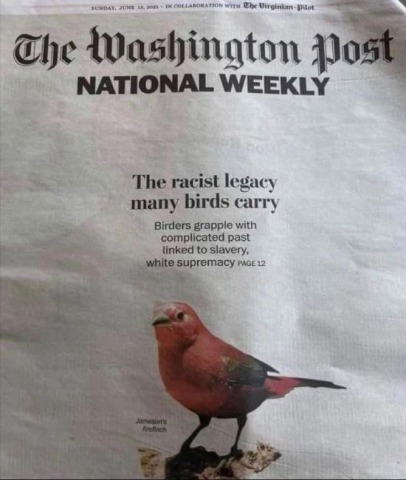 Some things, of course, are racist.  However, the Left’s claim that everything under the sun is racist is sheer delusion.

I don’t mean that the claim isn’t motivated.  Delusion is usually highly motivated.  Calling everything racist provides a convenient cover for the racially callous policies of the Left itself.  There are many such policies, such as trapping black kids in inferior public schools without opportunities to opt out.  But by far the most egregious example of racism on the Left is the promotion of abortion among blacks, on a genocidal scale, beginning with the eugenicist Margaret Sanger and continuing right into the present.

Besides serving as cover, claiming that everything is racist also serves as compensation, since guilt does funny things to people.  One of its effects is a raging compulsion to appear virtuous: “You racist!” cries the Left-wing racist.  Of course providing cover and providing compensation aren’t mutually exclusive, for the claim may do both of these things.  It may have other motivations too.  What it can’t be is a sane contribution to discussion.  You have to be willfully crazy to think everything is racist -- and at least willfully oblivious not to notice that one of the things that really is racist is today’s so-called antiracism.

We will always have a Left.  I am pretty sure, though, that we won't have a sane, non-delusional Left until progressives give up their love affair with making children disappear, especially the children of the dark-skinned and the poor.

In the meantime, whenever you see a guilty Leftist, do as you would do with a stage magician:  Don't look where he's pointing, but where he isn't.

How to Think About “Institutional” Racism