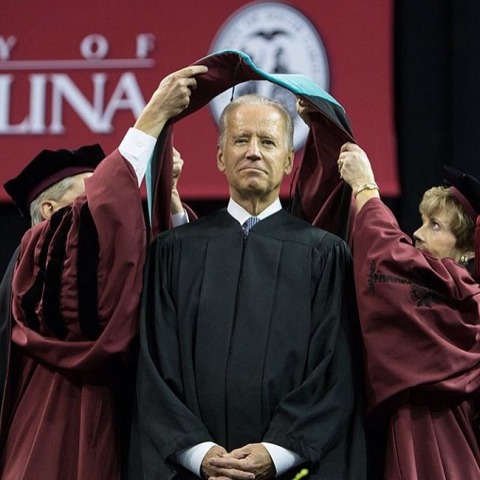 The other party has its own difficulties with relativism.  Mr. Biden, however, presents a particularly conspicuous and persistent case of what we might call the relativistic paradox:  Although relativists seem to say that there is no moral law, they insist on the moral rightness of their relativism.

In 1991, then a senator, opposing the Clarence Thomas nomination to the Supreme Court, Mr. Biden worried in an op-ed piece in the Washington Post that the nominee might believe in “a static set of unchanging [moral] principles,” rather than an “evolving body of ideals.”  His statement was relativistic, because it denied that there is a thing as an unchanging moral principle.  But the statement also exhibited the relativistic paradox, because at the same time it insisted that there is.  For consider:  What did Mr. Biden mean by suggesting that moral ideals “evolve”?  I don’t think he meant that they undergo meaningless and arbitrary change; after all, he approved of this so-called evolution.  What he meant was that moral ideals are getting better.  But to suggest that they are changing for the better presupposes a standard of moral comparison, a yardstick of better and worse, which doesn’t change.  So even in order to say that our moral ideals have no fixed content, Mr. Biden needs at least one moral principle which does have fixed content – the principle by which he approves change in the other ones.

He also worried that the nominee might view the natural law as a “specific moral code regulating individual behavior” rather than something that “protects moral freedom, even in areas of moral choice.”  But to suggest that instead of laying down a moral code, the natural law protects moral choice, is to say that it is a moral code, for it does limit moral choice.  It declares exactly one restriction, which it considers all-important.  This restriction is, “Thou shalt not restrict choice.”  Once again we encounter the relativistic paradox.

And now the plot thickens.  We have just seen that if you say that I must not restrict moral choice, then my moral choice has been restricted, for I am not allowed to choose to restrict moral choice.  But it is logically impossible to put just one moral choice off limits.  To say that the only choice that we are not allowed to make is to restrict moral choice is just double talk.  Consider rape, for instance.  You may either permit rape or forbid it.  Either way, you are restricting someone’s choice.  Some relativists try to escape this dilemma by saying that the rapist wants to restrict the woman’s choice, but the woman doesn’t want to restrict anyone’s choice.  Nonsense.  If you permit rape, you are restricting the woman’s choice, because her choice would have been not to be raped.  If you forbid rape, you are restricting the rapist’s choice, because his choice would have been to rape her.  How do we decide which of the two choices is sacrosanct and which one isn’t?  The only way to do so is to fall back on a moral principle which tells us that rape is wrong and resisting rape isn’t.  So you aren’t merely putting one choice off limits, that is, the choice to restrict moral choice.  You are also – in this case, rightly -- putting another choice off limits – in this case, the choice to rape.  And so it goes.

Not only is it logically impossible to put just one choice off limits, but we also find that when Mr. Biden suggests that he wants to put only one choice off limits, he doesn’t mean it.  Leaping from the 1990s to the present, in which he is still stuck in the same event horizon, we find that Mr. Biden, now president, is the most ardently pro-abortion person ever to hold that office.  Mr. Biden chooses to restrict the choice of individuals, medical personnel, and organizations to refuse subsidizing or cooperating in choices which they consider gravely immoral.  Instead he insists that they choose his way, which is to subsidize and cooperate in them.

And so we advance toward the truth of the matter.  The relativistic talk of protecting choices in general never really protects choices in general, because that cannot be done.  You can protect some choices, but it is impossible to protect all choices; to protect some choices logically entails restricting others.  For example, to protect the decision “I choose that someone else will subsidize my act” is to restrict the decisions of other people who choose not to subsidize my act, and vice versa.  So on close examination, what the moral relativist really does is forbid the choices he doesn’t like, and permit or command the choices he does like.

So what?  Doesn’t all morality do that?  Doesn’t all morality encourage good choices and restrict bad ones?  Yes, but there is a difference.  The moral relativist doesn’t do it in the good, old-fashioned, honest way, by explaining why the choices he restricts are morally bad and why the choices he encourages are morally good.  Instead he pretends that he is not restricting anything at all – that he is following the policy of protecting choices in general – which, as we have seen, is impossible.  In other words, he enforces his morality by pretending (a) that he isn’t enforcing it, and (b) that it isn’t a morality.  So moral relativism isn’t just a false and bad philosophy; it is a crooked and deceptive philosophy.

Now you may object that the much-mocked Mr. Biden is an easy target.  Perhaps he is not crooked and dishonest, but just a little stupid.  Perhaps he is not so much deceiving others as deceiving himself, trying to making some sort of peace with his uneasy Catholic conscience.  I think this may very well be true.  But this kind of stupidity is not accidental; it is motivated, and the motivation is bad.   If I lie to myself to make peace with my conscience, it is nonetheless a lie, and it may still be criticized for what it is.

What Kind of Progress Does Progressivism Want?