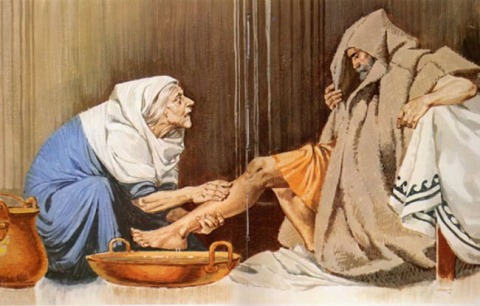 Currently, I am preaching through Paul’s letter to the Ephesians.  I find myself at the tail end of the “household code” in chapters 5 and 6, which teaches the duties of husbands and wives, children and parents, and slaves and masters.  I have arrived at slaves and masters.

My congregation may be described as a typical small American church with no slaves or masters in sight and a strong belief that slavery is a great moral evil.  I want to listen to the text on its own ancient terms. I particularly like the notion of Joseph Capizzi, who wrote that in the mind of the apostle “slaves and masters are judged by their behavior, not their status.” Such a thought is radically countercultural today, of course, and I would like to go deeper in my understanding of it.

Do you think it is possible to be faithful to the text of Ephesians -- which clearly does not take an abolitionist approach -- while also showing rationally that Paul’s ethics are both in harmony with those of Jesus, and acceptable to the dictates of a well-formed conscience?  Any help would be much appreciated.

I notice that St. Thomas regulates slavery virtually out of existence, in much the same way that we would like to be able to regulate abortionists out of existence.  I also read Aristotle as implying that slavery could be morally permissible only if slave and master were friends – but I cannot imagine how they ever could be.

You are surely right about the household codes.  Their precedent was the Stoic household codes, which were addressed to persons of higher rank and merely mentioned persons of lower rank.  However, the New Testament household codes are radically different.  In the first place, they not only mention persons of lower rank, but address them personally.  Moreover, New Testament codes always list social roles in pairs -- husband and wife, parent and child, master and slave.  Although the duties in each pair are not identical, nevertheless they are reciprocal, based on the love of each person for the other member of the pair.  Nothing like this appears in Stoic teaching, where the main concern is not that I make myself a servant, as Christ did, but that I maintain the dignity of my position.

St. Paul’s letter to Philemon is very much in line with the New Testament household codes, because Philemon and his runaway servant Onesimus are now expected to view themselves as brothers.  Although Paul doesn’t place Philemon under command, it would be difficult for Philemon to read the letter without concluding that he should manumit Onesimus.  Tradition holds that this is the same Onesimus who later became a bishop and a saint.

I can imagine a sort of friendship between a master and a bondservant.  Homer depicts deep mutual faith between the returning Odysseus and his old bondservants, the shepherd Eumaos and his aged nurse Eurkyleia.  She is the first to recognize him when he returns to his home incognito; the scene is portrayed in today’s image.  I don’t think this touching mutuality was intended as fantasy, but as something the possibility of which Homer’s listeners would have recognized.  We also see that in European history, vassals sworn to give their lives to protect their royal master were sometimes called his “Companions.”  That is how they were regarded, and that is how they regarded themselves.  It was considered a privilege to be able to say to one’s lord, “Command me!”  And this ought to be our attitude toward God.

What else can I say?  Not much, I’m afraid.  But I do have a few small reflections.

As we know, people prattle about how the Bible “condones slavery.”  But “condones” is a sneaky word.  The Bible “condones” slavery only in the way it “condones” revenge.  We have to view even divine law in a developmental context, because the Old Testament law was not just law, but also pedagogy.  The people were not yet ready to be told that they should not take revenge or hold slaves.  Yet wherever possible, Torah moderated such practices.   Revenge was limited to equivalent damages.  Slaves were to be freed in jubilee years, and this is but one of the many restrictions on bondservice.

In the same way, the Fathers of the Church thought that when Jesus explained that Moses permitted the Israelites to divorce their wives “because of the hardness of their hearts,” he meant that if they had not been permitted to divorce them, they would have killed them.  Perhaps slavery should be viewed that way too.  If the Israelites had not been permitted, say, to makes regulated slaves of those taken in war, they might have practiced barbaric cruelties upon them and then cut their throats.

This must be the sort of thing St. Thomas Aquinas has in mind when he argues that the law must lead people to virtue gradually rather than all at once, lest they break out into even graver evils.  Quoting from Proverbs, he reminds us that “He who bloweth his nose violently bringeth forth blood.”

We also forget today that ancient slavery was not all one thing.  Being a slave in the mines must have been very like being in hell.  On the other hand, some ancient slaves occupied such positions as secretaries, tutors, and estate managers.  Negotiated hostages, kept by both sides to guarantee adherence to treaties, were not slaves, but they were not free to leave either.

In our own day too, we need to make distinctions among various kinds of bound service.  Draftees are in a condition of indentured servitude.  For that matter, so are those who voluntarily enlist, and those who sign contracts with private employers committing them not to change jobs within a specified period of time.  Convicted criminals who are compelled to perform labor are in penal servitude.

I suspect that much of our difficulty in accepting what the New Testament says and doesn’t say about slavery arises not from our being morally elevated, but from our not being elevated enough.  We quickly judge the sins of other times, such as slaveholding, but not the sins of our own time, such as abortion and exploitive sexuality.  We do not really believe that one can be inwardly free regardless of his legal or exterior condition.  Even the Stoics knew that this was possible; it is shameful to think that we Christians, who ought to know better, cannot even rise to the Stoic level in this respect.  And although nothing is more common than to give lip service to carrying our crosses, we do not want to believe that submitting to suffering really conforms us to Christ.  When we read the passage in which St. Peter encourages those who are treated unjustly to be patient, we are likely to think he is “blaming the victim” – which rather misses the point.